Two Buildings owned by Mr Tunde Alabi and Mr Tunji Owoeye located beside the popular Ogun State Golf Resort,Mamu Village was 3 days ago demolished by Ogun State Government without passing through due process.

Narrating what led to the senseless demolition to News Men,Mr Saheed Omogoye who worked as an engineer on the site Described the incident as unfortunate under the present leadership of Prince Dapo Abiodun,Governor Ogun State who detests destructions of properties under his administration.

According to him,the commissioner Mr Tunji Odunlami had series of meetings with them on the said structure situate on a Three plots of land with registered Building Approval number of ABC ZPO/R/334/10/2020 for Alabi Babatunde and ABC ZPO/R/324/10/2020 for Tunji Owoeye before the demolition was carried out, promising to divert the road construction that leads to Hillcrest Estate. According to original plan, the road was designed in conformity with the governor’s mindset of not destroying properties along the path during construction. But for reasons best known to the handlers of the illegal demolition, an on- slaught deviation away from the golf field where the designated road passed ,was corruptly perpetrated over night to satisfy their selfish interest or a certain individual. 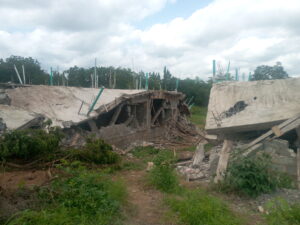 The said demolition was carried out without any court order or notifications to the affected building owner which can best be described as dictatorship.

Some concerned residents lamented on why the same government that granted a building approval suddenly found out it was issued in error,who do we blame. Can some one hold government accountable for such a costly mistake even after we learned the commissioner and some of his boys had requested and accessed same building approval from the owner of the building. 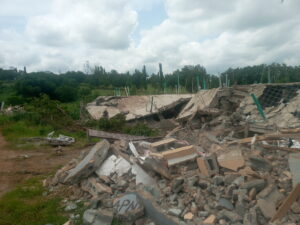 The Baale of Mamu land,Chief Fredrick Fadipe while responding to questions from our reporter on what was expected of government since it happened in his community has called on the Governor,Prince Dapo Abiodun to investigate the motive behind such demolition with adequate compensation awarded to those affected because it was learned both building cost a whooping sum of N50Million. This is huge especially at this period of economic challenge and high cost of building materials.

According to the Baale,”the government and the governed are humans that should learn to accommodate and consider each other’s plights under the present situation in our country.

We ought to be kept abreast of first hand information of happenings within our community as baale before any such actions are embarked upon by government .We are not in a banana Kingdom. The present administration of Prince Dapo Abiodun is people and community centered , I will implore a modus operandi that gives us peaceful co existence and cooperation that brings about structural development in our community and not tactically trying to lay us off our community and villages by acquiring our lands for others to build and live in, we cherish our heritage and culture as much as we cherish our environment and God given lands.

I as the Baale met with a cross section of Road Construction Engineers that outrightly condemned the size of the proposed road to the said Hillcrest Estate.

How can an engineer construct a road with width more than the conventional Expressway at the front of Governor’s office, its unethical and we should learn to consider each other while embarking on developmental projects. Government projects should be people friendly, that is not to say individual interests should over ride public interest though.

The three big questions I am yet to receive answers to are
(1) Which department of Ogun State Government Destroyed the said building ?
(2) Why were the owners of the building not served appropriate demolition documents before embarking on it?
(3) Was the Demolition order from the Executive Governor of the state, Prince Dapo Abiodun as claimed by those workers/labourers that destroyed the N50Million worth of Building.

Expressing his view over the unfortunate incident, a co building owner ,Mr Tunji Owoeye expressed dissatisfaction about the demolition, saying that” I am highly embittered this could happen in a state governed by democrats where some one can wake up one day and decide to pull a multi million naira worth of building down. No wonder Nigerians in diaspora are not encouraged to invest in their mother land. This can never happen any where in the world he claimed”.

I am sure they will be hearing from us very soon and I implore the constituted authority under the leadership of prince Dr Dapo Abiodun to do the needful under the ambit of the law.

Information reaching us through a golfer who prefers to remain under the condition of anonymity said he had a conversation with Surv. Deborah that works with Cranesburg construction company in charge of the said road construction and her stand then was that the buildings were not supposed to be affected,though their proximity is very close,she even emphasized that Golf Resort Management are not even doing enough to salvage Properties/Buildings by letting off some portion of their lands for the construction.